Today, I interview Solstice author Jack Strandburg. Jack was born and raised in Cleveland, Ohio. He is a degreed professional with a background in Accounting and Information Technology and recently retired after more than 33 years working for a Fortune 500 company. He has been riting since his teenage years.

He self-published an inspirational titled An Appointment With God: One Ordinary Man’s Journey to Faith Through Prayer, by Trafford Publishing. His first published novel by Solstice Publishing is Hustle Henry and the Cue-Ball Kid, a parody of the movie, Butch Cassidy and the Sundance Kid.

He is currently working on a novella titled Honor Among Heroes, writing journals for an upcoming inspirational non-fiction book titled The Hand of God; and completed 70% of a first draft for a second mystery novel titled War Zone.

He is an editor for Solstice Publishing, and currently developing a freelance editing business. He has edited over 30 fiction works in various genres.

Jack currently lives with his wife and two grown children, in Sugar Land, Texas. He has three grandchildren.

A Head in the Game is 327 pages long and was published in January, 2017 by Solstice Publishing. 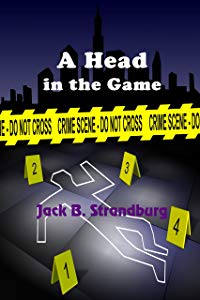 Chicago Homicide Inspector Aaron Randall faces his toughest case while dealing with doubts about his career and the potential of a romantic relationship.

Jared Prescott, a Heisman Trophy winner and Vice President of a large and respected pharmaceutical company, is found murdered at a seedy motel. The investigation uncovers multiple suspects with multiple motives. When the body of his close friend and informant is found stabbed to death in a deserted alley, followed by the murders of two women, Randall suspects a conspiracy.

Randall is hamstrung during the investigation by pressure from the commissioner down the chain of command because the president of the pharmaceutical company, anxious for resolution to Jared Prescott’s murder, is a close friend with a Senator whose sights are set on the Oval Office.

Why did you decide to write this book?

The original idea arose from the following writing prompt: “Imagine that you are downtown in a major city during rush-hour. Suddenly a woman walks toward you, holding a bag. She meets you eyes, smiles, hands you the bag, and says, “Here you go.” Before you can say or do anything, she turns and walks off. (Scott Edelstein – The No-Experience-Necessary Writer’s Course).

I chose the contents of the bag to be a fake head. The exercise led to a short story, but over time grew to a novel, and the idea held my interest enough to seek publication.

What genre is your book?

Do you consider your book character-driven or plot-driven?

Plot-driven – I believe that even if you have the most interesting characters in the world, if nothing happens, you have no story, and in my outline process, I’ve learned that characters will react in different ways to significant events, and even stray from the original character profile.

What makes your book unique?

The antagonist is always at least one step ahead of the protagonist (until the climax), planting evidence to implicate other characters as suspects in the original murder.

Do you plot ahead of time, or let the plot emerge as you write?

Over the years, I tried different approaches to writing, but learned I need to have at least an idea of how the story ends in order to outline events, conflicts, and obstacles in the middle. That’s not to say the plot does not emerge, but at the very least, I need a road map to guide me through the story.

How do you develop the names for your characters?

The more significant the character’s role in the story, the more memorable I try to name them. For example, a name with more syllables will generally make a bigger impression on the reader. Also, a character’s profile sometimes (not always) lends itself to one name v. another. For instance, the original last name of my protagonist in A Head in the Game was Crawford. I changed it to Randall, simply because “Randall” sounded a little like a tougher character to me.

How do you decide on the setting?

Once again, some settings will stand out better – a cemetery v. an amusement park for example. It will also depend on what a character or characters do for a living. A hospital in one or more scenes is likely when one of the characters is a doctor or nurse.

Do you have a writing mentor?

What’s your writing schedule? Do you have a favorite place to write?

I usually do my best writing in the mornings. I like to vary my places to write, but usually will write where I feel most comfortable. A reclining chair v. a chair in my office. I sometimes listen to music (usually nature or New Age).

Sign up for my occasional newsletter and get a free Shelby McDougall story!
(You’ll also receive the monthly Paper Angel Press newsletter. No spam, I promise.)

Sign Up To Get a Free Shelby McDougall Story!