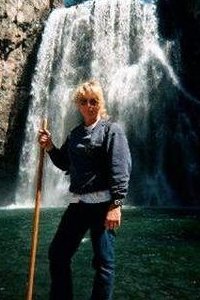 Today I’m interviewing Andrea Monticue. Andrea is published by Paper Angel Press, and I was able to meet her during BayCon in May.  It was fun hanging out!

Andrea is an aircraft technician who has crawled around inside of the B2, corporate jets, and puddle jumpers. She figures this makes her an expert on starships.

She and her wife live on the west coast of the North American Continent, enjoying redwoods, scuba, archery, bicycling, skateboarding, coffee, reading, and dogs.

Andrea can be found at Memoirs of an Earthling.

Civilization fell. It rose. At some point, people built starships.

A millennium after the Earth was abandoned to climate change and resource depletion, Sharon Manders wakes up in a body that used to belong to somebody else, and some say she was a terrorist. She has no idea how she could be digging for Pleistocene bones in Africa one day, and crewing on a starship the next. That was just before she met the wolfman, the elf, and the sex robot.

Struggling with distressingly unreliable memories, the expectations of her host body’s family and crewmates, future shock, and accusations of treason, Sharon goes on the lam to come face to face with terrorists, giant bugs, drug cartels, AIs, and lawyers.

All things considered, she’d rather be back in 21st Century California.

I love the blurb and I’m looking forward to reading the book. I’ll be reviewing it in a future blog post.

Here’s my interview with Andrea.

Why did you decide to write this book?

This question relates to the one below, How do you decide on the setting? I wrote this book largely because I already had a lot of the background material.

What genre is your book?

Do you consider your book character-driven or plot-driven?

There are parallel story lines in this book. One, following the protagonist, is character driven. The other part is about society’s reaction to the character and the events that brought her into existence, and that is plot driven.

What makes your book unique?

Well, that’s a loaded question, eh? I don’t believe there’s anything in this book that can’t be found in other books. I mean, spaceships, robots, lycanthropes, and elves can all be found across multiple genres, though there probably aren’t very many that bring that combination together under one cover. I’d like to think that I put them all together in a unique story.

Do you plot ahead of time, or let the plot emerge as you write?

Both. I start out with an overall outline of the story, but often change it up as I write. In the case of Memory and Metaphor, I had some very solid ideas about where the plot was going to go and what bases we were going to touch on the way. Seeing the story fleshed out, though, made me realize that some of those goals weren’t realistic and needed overhauls.

That being said, the very first thing I wrote in the story were the first two paragraphs of chapter three, and everything else evolved from that.

How do you develop the names for your characters?

I sometimes already have a name ready to go. Other times I use various websites designed for developing character names. I use those primarily for minor characters. Since my the story takes place a thousand years from now, in some cases I have taken contemporary names and asked myself how they might evolve over the centuries.  For instance, I might take Jennifer and change it to Jéehnufair.

The name of the protagonist in Memory and Metaphor had to be one that remained static over the centuries.

How do you decide on the setting?

A long time ago, maybe ten or fifteen years, I read an article in a magazine. I think it was Sky and Telescope but it might have been a similar publication. The article discussed the possibilities of planets in the Alpha Centauri system, and how stable the orbits might be. I ended up writing several programs to simulate the gravitational environment of the system. None of them could be considered quality programs, and even the smallest errors tended to multiply horrendously when extrapolated over mere centuries, let alone billions of years. I didn’t learn anything definitive other than I would never be a good programmer.  In the process, I did a lot of reading on current theories of planetary system formation (I think all of them have become obsolete in the meantime), and ended up creating what I thought was a perfectly reasonable, though entirely fictional, interplanetary society.

The biggest question, of course, was how did humans end up on a planet that looked so Earth-like orbiting Alpha Centauri A?

Do you have a writing mentor?

Not officially. I try to learn from other writers whose work I admire, but I don’t ask their permission first.

What’s your writing schedule? Do you have a favorite place to write?

While I try to stick to a schedule, I’m not very successful at it. I generally do my best writing when I’m supposed to be doing something else – like math homework.

My favorite place to write used to be at a hometown place called Chit Chat Café.  I’ve recently moved, though, and I’m looking for a new favorite place.

I read a long time ago that Ernest Hemingway wrote the last page of Farewell to Arms thirty-nine times. This is apocryphal, as near as I can tell. Still, it keeps me going when I’m in that slogging stage of writing books.

How can readers connect with you?

Through my website at Memoirs of an Earthling and also on my Paper Angel Press author page: Andrea Monticue

Sign up for my occasional newsletter and get a free Shelby McDougall story!
(You’ll also receive the monthly Paper Angel Press newsletter. No spam, I promise.)

Sign Up To Get a Free Shelby McDougall Story!